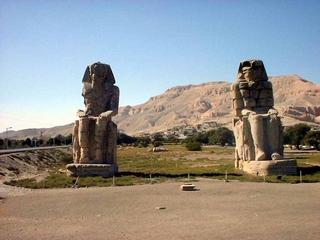 Amenhotep III (18th Dynasty) built a mortuary temple in Thebes that was guarded by two gigantic statues on the outer gates. All that remains now are the 23 meter (75 ft) high, one thousand ton statues of Amenhotep III. Though damaged by nature and ancient tourists, the statues are still impressive. Ancient Egyptians called the southern of the two statues "Ruler of Rulers". Later travelers called them "Shammy and "Tammy", which may have been a corruption of the Arabic words for "left" and "right". Today they are known locally as "el-Colossat", or "es-Salamat". The statues are made from carved blocks of quartzite quarried either at Giza or Gebel es-Silsila. The Northern statue depicts Amenhotep III with his mother, Mutemwia, while the southern statue is of Amenhotep III with his wife, Tiy and one of his daughters. On the sides of the statues are reliefs depicting Nile gods joining together plants symbolizing Upper and Lower Egypt. Due to an earthquake in 27 BC, these statues became known for a bell like tone that usually occurred in the morning due to rising temperatures and humidity. Thus they were equated by the early Greek travelers with the figure of Memnon, the son of Aurora who's mother, Eos, was the goddess of dawn. To be granted a song meant that you were very much in favor of the gods. Visitors came from miles around to hear the music, including Emperor Hadrian, in 130 A.D. The Roman emperor Septimius Severus, seeking to repair the statues in 199 AD, inadvertently silenced them forever