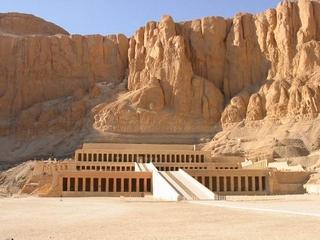 In The Hatshepsut Temple is the best-preserved of the three complexes. Called by the people Djeser-djeseru, "sacred of sacreds", Hatshepsut's terraced and rock-cut temple is one of the most impressive monuments of the west bank. Situated directly against the rock face of Deir el-Bahri's great rock bay, the temple not only echoed the lines of the surrounding cliffs in its design, but it seems a natural extension of the rock faces. The temple was little more than a ruin when first excavated in 1891, but it has led to a great deal of successful reconstruction. The temple took 15 years to build and was modified throughout that time. The approach to the temple was along a 121-foot wide, causeway, sphinx-lined, that led from the valley to the pylons. These pylons have now disappeared It consisted of three broad courts separated by colonnades, probably imitating the earlier funerary complex of Mentuhotep to its south. These terraces were linked by ascending ramps, and bounded by dressed limestone walls. Hatshepsut recorded that she built the temple as "a garden for my father Amun," and the first court once held exotic trees and shrubs brought from Punt. Its portico was decorated on its northern side with scenes of the marshes of Lower Egypt, and on the south side, with scenes depicting the quarrying and transportation of the great obelisks in Upper Egypt. The portico on the second court was carved on its southern side with relief scenes of the exploits of her soldiers on the famous trading mission to Punt, and on the north side of this portico are depicted the birth scenes showing Hatshepsut's divine conception as daughter of Amun himself. 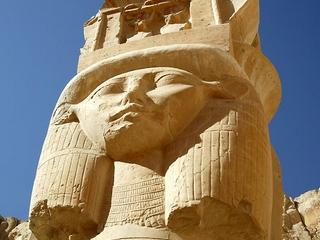 In The site of Deir el-Bahri was traditionally connected with the goddess Hathor, chief deity of the Theban necropolis, and long sacred to the goddess. At the southern end of the second colonnade is a complete Hathor chapel, originally with its own entrance. The chapel contains a vestibule with the characteristic Hathor-headed pillars, a 12-columned hypostyle hall and inner rooms also decorated with various scenes of Hatshepsut and Hathor. At the northern end of the same colonnade is a somewhat smaller chapel of Anubis, again with a 12-columned hall and inner rooms. The upper terrace had an entrance portico decorated with Osiride statues of the female king, that is, statues of Hatshepsut sculpted to appear as the god Osiris, before each pillar, though most of these statues have been destroyed. The portico opened to a columned court flanked on the left with a chapel dedicated to the royal cult, and on the right by a chapel of the solar cult, with open court and altar. Eighteen cult niches, nine on each side, flank the rock sanctuary of Amun, which was the focus of the entire complex. During the Amarna period, many of the images of Amun were destroyed During the Ptolemaic time the sanctuary was expanded to include the cults of architects Amenhotep son of Hapu, who oversaw works for Amenhotep III, and Imhotep, who designed the Step Pyramid of Djoser at Saqqara. In the 7th century ACE, the temple area became the site of a Coptic monastery, from which the Arabic name Deir el-Bahri is derived.