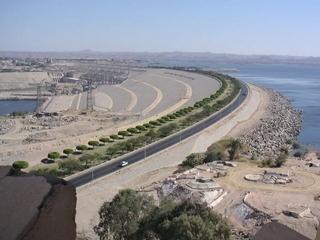 In The British began construction of the first dam in 1899. Construction lasted until 1902.It was opened in December 10 1902. The project was designed by Sir William Willcocks and involved several eminent engineers including Sir Benjamin Baker and Sir John Aird, whose firm, John Aird & Company, was the main contractor. A gravity dam, it was 1,900 m long and 54 m high. The initial design was soon found to be inadequate and the height of the dam was raised in two phases, 1907-1912 and 1929-1933. When the dam almost overflowed in 1946 it was decided that rather than raise the dam a third time, a second dam would be built 6 km upriver (about 4 miles). Proper planning began in 1952, just after the Nasser revolution, and at first the USA and Britain were to help finance construction with a loan of USD $270 million. Both nations cancelled the offer in July 1956 for reasons not entirely known. A secret Egyptian arms agreement with Czechoslovakia (Eastern Bloc) and Egyptian recognition of the People's Republic of China are cited as possible reasons. Soon thereafter, Nasser nationalized the Suez Canal, intending to use its tolls to subsidize the High Dam project. This prompted Britain, France, and Israel to attack Egypt, occupying the Suez Canal and precipitating the Suez Crisis. The United Nations, USSR and US forced the invaders to withdraw and the canal was left in Egyptian hands. The Egyptian government continued to intend to finance the dam project alone by using the revenues of the Suez Canal to help pay for construction. But as part of the Cold War struggle for influence in Africa the Soviet Union stepped in in 1958, and possibly a third of the cost of the dam was paid for as a gift. The Soviets also provided technicians and heavy machinery. The enormous rock and clay dam was designed by the Russian Zuk Hydroproject Institute. 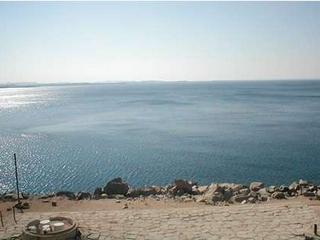 In Construction began in 1960. The High Dam, as-Sad al-'Aali, was completed on July 21, 1970, with the first stage finished in 1964. The reservoir began filling in 1964 while the dam was still under construction and first reached capacity in 1976. The reservoir raised concerns from archaeologists and a rescue operation was begun in 1960 under UNESCO. Sites were surveyed and excavated and 24 major monuments were moved to safer locations (see Abu Simbel) or granted to countries that helped with the works (such as the Debod temple in Madrid and the Temple of Dendur in New York). The Aswan High Dam is 3,600 m in length, 980 m wide at the base, 40 m wide at the crest and 111 m tall. It contains 43 million m³ of material. At maximum, 11,000 m³ of water can pass through the dam every second. There are further emergency spillways for an extra 5000 m³ per second and the Toshka Canal links the reservoir to the Toshka Depression. The reservoir, named Lake Nasser, is 550 km long and 35 km at its widest with a surface area of 5,250 km² and holds 132 km³. The dam powers twelve generators each rated at 175 megawatts, producing a hydroelectric output of 2.1 gigawatts. Power generation began in 1967. When the dam first reached peak output it produced around half of Egypt's entire electricity production (about 15% by 1998) and allowed for the connection of most Egyptian villages to electricity for the first time. The dam mitigated the effects of dangerous floods in 1964 and 1973 and of threatening droughts in 1972-73 and 1983-84. A new fishing industry has been created around Lake Nasser, though it is struggling due to its distance from any significant markets.