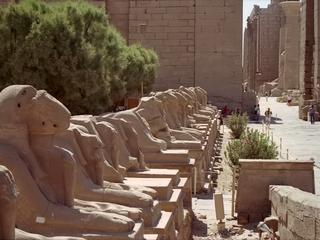 In ancient Egypt, the power of the god Amun of Thebes gradually increased during the early New Kingdom, and after the short persecution led by Akhenaten, it rose to its apex. In the reign of Ramesses III, more than two thirds of the property owned by the temples belonged to Amun, evidenced by the stupendous buildings at Karnak. Although badly ruined, no site in Egypt is more impressive than Karnak. It is the largest temple complex ever built by man, and represents the combined achievement of many generations of ancient builders. The Temple of Karnak is actually three main temples, smaller enclosed temples, and several outer temples located about three kilometers north of Luxor, Egypt situated on 100 ha (247 acres) of land. Karnak is actually the sites modern name. Its ancient name was Ipet-isut, meaning "The Most Select (or Sacred) of Places".
This vast complex was built and enlarged over a thirteen hundred year period. The three main temples of Mut, Montu and Amun are enclosed by enormous brick walls. The Open Air Museum is located to the north of the first courtyard, across from the Sacred Lake. The main complex, The Temple of Amun, is situated in the center of the entire complex. The Temple of Monthu is to the north of the Temple of Amun, and next to it, on the inside of the enclosure wall is the Temple of Ptah, while the Temple of Mut is to the south. There is also the small Temple dedicated to Khonsu, and next to it, an even smaller Temple of Opet. Actually, there are a number of smaller temples and chapels spread about Karnak, such as the Temple of Osiris Hek-Djet (Heqadjet), which is actually inside the enclosure wall of the Temple of Amun. 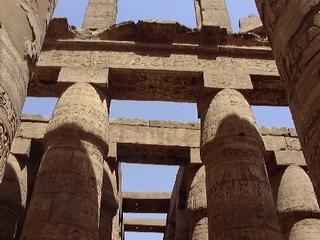 In the Great Temple of Amun, the Second Pylon of Karnak was built by Ramesses II. The Ptolemies did some extensive repairing and some new building on the center section. Curiously enough, they left the columns and the facade of the First Pylon unfinished and left the mud-brick ramp where it was at. The reason for the work being left unfinished is not clear.
The Hypostyle Hall is found after passing through the Second Pylon. The hall is considered to be one of the world's greatest architectural masterpieces. Construction began during Ramesses I's reign. He was the king who founded the Nineteenth Dynasty and was king for only one year. The work continued under Seti I (1306 - 1290 BC). Seti I also built the Temple of Abydos and many other temples. The hall was completed by Seti I's son, Ramesses II. The effects that are produced inside the hall are much different than they were originally. The huge architraves are not above the capitals that tower above. Toward the center of the hall several architraves and windows that have stone latticework still remain.
This small area can give one an idea of the builders' intent for the lighting effects. Some imagination is required here to appreciate what it must have looked like. The walls, ceilings and columns are painted with the natural earth tones. The light that was allowed in originally kept most of the hall in shadows. The hall ceiling was 82 feet high and was supported by 12 papyrus columns. The columns are made of sandstone and set in two rows of six. Each row is flanked on either side by 7 rows of columns that are 42 feet (12.8m) high. Each row has 9 columns, however the inner rows have 7 columns. The reliefs throughout the hall contain symbolism of Creation. The reliefs in the northern half are from the time period of Seti I and are obviously better done than those done by his son Ramesses II, which are in the southern half. Ramesses II's reliefs are cut much deeper than those of Seti's. This gives a much more dramatic light and shadow effect.