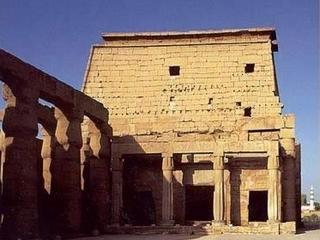 In The Temple of Luxor was the center of the most important one, the festival of Opet. Built largely by Amenhotep III and Ramesses II, it appears that the temple's purpose was for a suitable setting for the rituals of the festival. The festival itself was to reconcile the human aspect of the ruler with the divine office. During the 18th Dynasty the festival lasted eleven days, but had grown to twenty-seven days by the reign of Ramesses III in the 20th Dynasty. At that time the festival included the distribution of over 11,000 loaves of bread, 85 cakes and 385 jars of beer. The procession of images of the current royal family began at Karnak and ended at the temple of Luxor. By the late 18th Dynasty the journey was being made by barge, on the Nile River. Each god or goddess was carried in a separate barge that was towed by smaller boats. Large crowds consisting of soldiers, dancers, musicians and high ranking officials accompanied the barge by walking along the banks of the river. During the festival the people were allowed to ask favors of the statues of the kings or to the images of the gods that were on the barges. Once at the temple, the king and his priests entered the back chambers. There, the king and his ka (the divine essence of each king, created at his birth) were merged, the king being transformed into a divine being. The crowd outside, anxiously awaiting the transformed king, would cheer wildly at his re-emergence. This solidified the ritual and made the king a god. The festival was the backbone of the pharaoh's government. In this way could a usurper or one not of the same bloodline become ruler over Egypt. 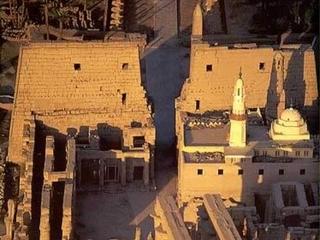 In In ancient Egypt the temple area now known as Luxor was called Ipt rsyt, the "southern sanctuary", referring to the holy of holies at the temple's southern end, wherein the principal god, Amun "preeminent in his sanctuary", dwelt. His name was later shortened to Amenemope. This Amun was a fertility god, and his statue was modeled on that of the similarly Min of Coptos. He also has strong connections to both Karnak and West Thebes. Known in ancient times as "the private sanctuary (Opet) of the south," the temple proper is located south of Karnak. The present temple is built on a rise that has never been excavated and which may conceal the original foundations. The early building may rest on a no longer visible older structure dating back to the 12th Dynasty. However, since neither the cult nor any part of the temple appears to predate the early 18th Dynasty; the few Middle Kingdom fragments found here more probably came from elsewhere and were transported to Luxor after the original buildings were dismantled. The earliest reference to the temple comes from a pair of stelae left at Maasara quarry, in the hills east of Memphis, inscribed in regnal year 22 of the reign of Ahmose, c. 1550 BC. The text records the extraction of limestone for a number of temples including the "Mansion of Amun in the Southern Sanctuary." But structural evidence appears at Luxor only during the co-rule of Hatshepsut and Tuthmosis III c 1500 BC. These elements are now built into the triple shrine erected by Ramesses II, c 1280 BC, the most substantial remnant of Luxor temple's Tuthmosid phase. The shrine was erected inside the first court, in the northwest corner, and reused elements from the original chapel dedicated by Hatshepsut and Tuthmosis III.. This small building had been the last of six barque stations built along the road that brought Amun and his entourage from Karnak to Luxor every year during the Opet Festival..