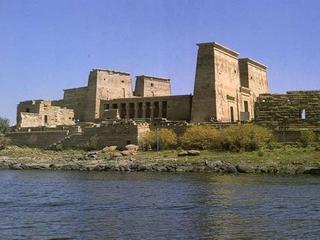 In Philae Temple was dismantled and reassembled (on Agilika Island about 550 meters from its original home on Philae Island) in the wake of the High Dam. The temple, dedicated to the goddess Isis, is in a beautiful setting which has been landscaped to match its original site. It's various shrines and sanctuaries, which include The Vestibule of Nectanebos I which is used as the entrance to the island, the Temple of the Emperor Hadrian, a Temple of Hathor, Trajan's Kiosk (Pharaohs Bed), a birth house and two pylons celebrate all the deities involved in the Isis and Osiris myth. The Victorian world fell in love with the romance of the Temple. But at night you can also visit the Sound and Light Show, a magical experience as floodlit buildings are silhouetted against the volcanic rocks and water surrounding them. So today, Philae is more fun then every before. Although antiquities on the island date between the 26th Dynasty and the Roman Period, most of the work is from that of the Roman. This was a time of immense popularity of the Goddess Isis, and this was her island, where pilgrims would come from all over the Mediterranean. Construction on the island took place over an 800 year span, and it was one of the last strongholds of Ancient Egyptian Religion which continued to flourish here into the 6th Century. When the Temples where finally closed by Justinian in A.D 550, it ended 4,000 years of worship of the pagan gods. The Philae Temple complex, prior to its removal and restoration, set alongside Biga Island. To the ancient Egyptians, Biga was the sacred mound, the first ground created from Nun out of Chaos. This was the legendary burial place of Osiris. The earth was considered to be part of his body so that only priests and temple servants were permitted to live there. 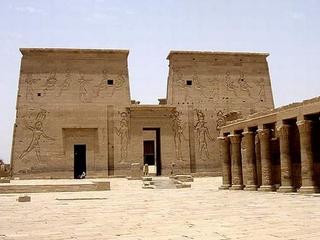 In Philae is an approximate Greek rendering of the local name "Pilak" known from hieroglyphic texts and which may be Nubian in origin. The ancient Egyptians saw in their name for Philae an etymology with the meaning "island of the time [of Ra]", i.e. creation, but the island's history is later than that. What we refer to today as Philae is the main temple complex relocated from that island, after the High Dam was built, to the island of Agilika. It was the center of the cult of the goddess Isis and her connection with Osiris, Horus, and the Kingship, during the Ptolemaic period of Egyptian History. Today, there are two dams at Aswan but of course, in ancient times, there were none. Prior to the dams, Philae Island occupied a position at the beginning or southern end of the First Nile Cataract, where the river gathered speed, dropping sixteen feet in swirling eddies and turbulent falls of white water for a distance of three miles. Various pharaohs attempted to calm or at least provide better passage around these rapids. Pepi I built at least one canal, as did Merenre, as early as the Old Kingdom, but later kings would also, such as Senusret III. There were numerous islands in the region, Amelia Edwards says hundreds, including Biggeh, the temple's current location of Agilika, a group of small islands at Awad and El Hasa, and below the Cataract (north), Siheil and Elephantine. During early times, the priests of Philae claimed that the source of the Nile was bottomless and lay beneath the rocks of Biggeh, where half the river rose to flow north and half to flow south. Their rivals were the priests of Elephantine, who made the same claim. Indeed, the river around these islands was even then over one hundred feet deep in places, with confusing waters that could twist and turn in all directions.