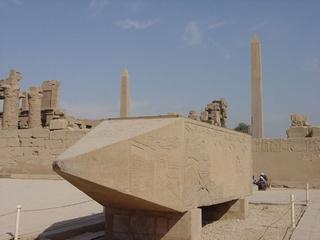 In Much of the red granite used for ancient temples and colossi came from quarries in the Aswan area. Around these quarries are many inscriptions, many of which describe successful quarrying projects. The Unfinished Obelisk located in the Northern Quarry still lies where a crack was discovered as it was being hewn from the rock. Possibly intended as a companion to the Lateran Obelisk, originally at Karnak but now in Rome, it would have weighed over 2.3 million pounds and would have been the worlds largest piece of stone ever handled. However, a crack in the stone occurred, which caused it to be abandoned. Tools left by it's builders have given us much insight into how such work was performed. The site has recently been renovated and equipped with tourist facilities. Nearby is the Fatimid Cemetery. In ancient times obelisks and other large stone objects were usually blocked out roughly before they left the quarry. There are several techniques suggested for the splitting of hard stone away from its surrounding rock. One method may have been to cut a groove along the line where the stone was to be detached and then to drive in wooden wedges which were soaked with water. The force of the swelling wood would act to split the granite - there is certainly evidence that this method was used in Roman times. Another method may have been to cut a groove with stone tools, or a primitive saw used with an abrasive, which would then be heated with charcoal and rapidly cooled with water, causing the stone to split. 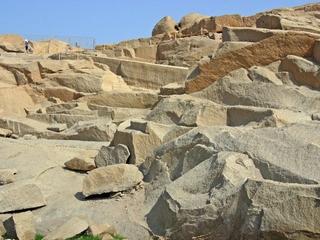 In Given the primitive soft-metal tools of the ancient Egyptians, the obelisk in the Northern Quarry shows us an amazing feat of technology and archaeologists have learned much about the techniques of stone-cutting from examining this abandoned monument and from the tools which have been left behind. It would appear that the stone, which measures 42m in length and would have weighed around 1216 tonnes, developed a flaw during quarrying and was never completed, left to lie still attached to the rock for the next 3000 years. It has been a tourist attraction for almost as long. The Northern Quarry is an fascinating place to visit for those interested in early technologies. It is famous for producing the granite used in the construction of the burial chamber of the Great Pyramid of Khufu as well as some of the casing stones in other pyramids. Every rock face shows the imprint of ancient stone workers with many cut-marks or artists sketches still to see. You can almost believe that the workmen have only just put down their tools and gone home for the night. The area of the northern quarry has been recently excavated and renovated by the SCA, its mounds of rubble cleared to reveal many previously unknown granite objects, including fragments of columns and statues. Archaeologists have been able to get a clearer picture of how the stone was cut, carved and transported and have found several ancient tools and artists' sketches. To the south of the unfinished obelisk, excavators found a hieroglyphic inscription dated to year 25 of the reign of Tuthmose III, an instruction from the King for the quarrying of two large obelisks to be erected in Karnak Temple and dedicated to Amun-Re. They also uncovered, close to the unfinished obelisk, the depressions made from the hewing of seven large obelisks, possibly those in Karnak and Luxor temples. Another important discovery was a harbour from where the stone was shipped northwards along the Nile, its walls revealing decorative graffiti of the god Bes, ostriches and fish. The site is now landscaped and re-opened and offers wide wooden walkways and steps between the many different levels of the quarry with a good viewing platform at either end of the unfinished obelisk. A visitors centre and open-air museum to display some of the artefacts, along with the inevitable tourist bazaar completes this unique experience.