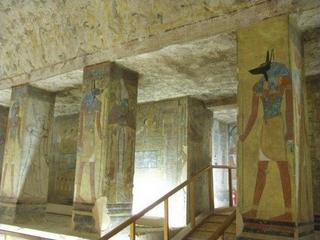 In The first king of the New Kingdom, Ahmose of the 18th Dynasty, built a pyramid-like structure at Abydos, which may or may not have been his original tomb. But all the remaining rulers of the period, except for the so-called Amarna interregnum, had their tombs cut into the rocks of the West Bank at Thebes, specifically at the Valley of the Kings. From Thutmose I in the 18th Dynasty of the New Kingdom period, all the kings, and occasionally high officials of that period, were buried in the secluded wadi, or dry gully, which today is called Valley of the Kings. The peak known in Arabic as el-Qurn was known in ancient times as dehent, the Horn, and was sacred to the goddesses Hathor and Meretseger, "She who loves Silence." The Valley, known as Biban el-Muluk, "doorway or gateway of the kings," or, the Wadyein, meaning "the two valleys," is actually composed of two separate branches. The main eastern branch, called ta set aat, or "The Great Place," is where most of the royal tombs are located, and in the larger, westerly branch where only a few tombs were cut. The Valley is hidden from sight, behind the cliffs, which form the backdrop to the temple complex of Deir el-Bahri. Though the most direct route to the valley is a rather steep climb over these cliffs, a much longer, shallower, route existed along the bottom of the valley. This was quite possibly used by funeral processions, pulling funeral equipment by sledges to the rock-cut tombs in the Valley. 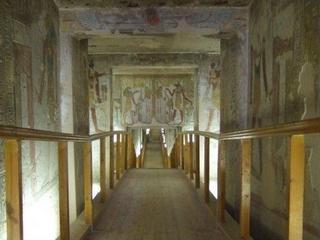 In With its worker's village later called Deir el-Medina, the valley was called the Place of Truth or Set Ma'at, in ancient times. The workers of Deir el-Medina, who for generations since their community was established, could reach the Valley in about 30 minutes by walking along the steep mountain paths. Today, energetic folks may spend 45 minutes to an hour climbing the paths leading from the north side of the amphitheater of Deir el-Bahri and over the mountain ridge into the Valley of the Kings. Their efforts would be rewarded by splendid views of the Theban region. Valley of The KingsThe Valley contains 62 tombs to-date, excavated by the Egyptologists and archaeologists from many countries. Not all of the tombs belonged to the king and royal family. Some tombs belonged to privileged nobles and were usually undecorated. Not all the tombs were discovered intact, and some were never completed. The powerful kings of the 18th and 19th Dynasties kept the tombs under close supervision, but under the weaker rulers of the 20th Dynasty, the tombs were looted, often by the very workers or officials supposedly responsible for their creation and protection. In order to prevent further thefts, the mummies and some of their funerary objects were reburied in two secret caches, not to be re-discovered until the 19th century of the modern era. Visitors to Egypt have often journeyed into the Valley to view the accessible tombs, including Tut's, but with the increasing tourism, urban and industrial growth, pollution, and rising groundwater, the tombs have suffered over the decades. Today their access is rotated, so that a smaller number of tombs are open at one time, and even then, many of the decorations and walls can only be seen behind glass. According to Diodorus and Strabo, and Greek and Latin graffiti, two writers of ancient times, a few of the tombs in the Valley of the Kings were known and visited by ancient tourists during Ptolemaic times. Today, only a few of the 62 known tombs are accessible and open to the public. Eleven of the tombs, including Tutankhamun's, Ramesses VI, Amenhotep II, and Seti I, have been set with electrical lighting.