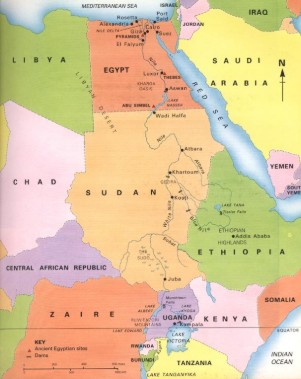 As the longest River on Earth, The Nile River was the most valuable link between Egypt and Africa. The Nile River come from the deep South of East Africa till it reach the Mediterranean Sea in the North of Egypt. So, it was considered the Highway between South and North of the Ancient World. All Goods from Africa came through the River Nile. And all Goods from Europe and Asia used the River Nile to go Africa. In short without the Nile River, Egypt would not be reach enough to build its great ancient civilization. Income from taxes on the traded goods threw the Nile River helped the pharaohs of Egypt to build their Temples, Pyramids and sustain a modern great country in that time.
Did you know that the ancient Egyptians constructed artificial canals from the main River Nile to Giza Plateau to transport the Huge Amount of Stones to build the Pyramids and without the help of this canals they would never be able to build this fantastic monument that till now we do not know all its secrets. Also, they built almost all their tombs in the West Bank of Nile River and the Temples in the East Bank to symbolize the Death with Sun Set and Birth on the Sun Rise.
Geography, the River Nile come from Deep East and central Africa. It passes 11 Countries till it reach the Mediterranean Sea which are “Uganda, Eritrea, Rwanda, the Democratic Republic of the Congo, Tanzania, Burundi, Kenya, Ethiopia, South Sudan, Sudan, and Egypt “.
The Nile is the main water source in all these countries which its water is pumped from two tributaries , the White Nile, the major stream which starts from the Great Lakes in Central Africa and the Blue Nile, the primary springhead of ninety percent of water and silt that flows at Lake Tana in Ethiopia and the two rivers join together in northern Khartoum, the capital of Sudan. Nevertheless, Lake Victoria is still regarded as the most essential source of the Nile River.
The Nile in Egypt extends from the northern limits of Lake Nasser in Aswan to the north of Cairo where the Nile is divided to form Nile Delta into two branches: The Damietta Branch and The Rosetta Branch.